Scientific bird ringing is a technique that involves placing a ring on the leg of a live bird. This ring is imprinted with a code that allows to identify both the bird as to the ringing area and the institution responsible for its arrangement. As a result, it is possible to study various aspects of the biology of ringed birds and the populations to which it belongs, from the information provided by any person who has been able to observe an individual ring. Among the aspects to be studied, we can mention migration habits, longevity, mortality and survival, evolution of populations, etc. All this can contribute to their conservation.

The archipelago of San Pedro is located in A Coruña, opposite the port of O Portiño, and is composed of 4 islands and several islets. Together they are separated from the mainland by a channel between 200 and 350 meters wide and about one kilometer long. Its total area is 7 hectares and its relief is fairly flat. It boasts an interesting biodiversity, which highlights their breeding colony of yellow-legged gulls. (Larus michahellis). 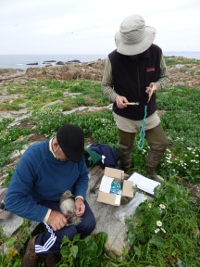 Grupo Naturalista Hábitat is a non-profit and a politically independent society, founded in 1979 under the base reference work for the study and conservation of natural areas and biodiversity of Galicia, from a naturalistic approach and based on scientific criteria. Among these works of conservation and dissemination, the Hércules and Phylloscopus Ringing Groups, part of Habitat, were conducting the ringing of yellow-legged gull chicks born in the colony of the islands of San Pedro, by means of PVC green rings with a white alphanumeric code that begins with the letters "ZR".